Dirk Debbink and his wife take pride in how their home looks. This is evident by the asphalt paving and landscaping project that was recently completed. The house was bought in December of 2010, and went through a really extensive remodeling of the house. The last part of this project was the landscaping and driveway.

“We wanted to have the driveway actually be part of the entire architectural work we were going to do to get everything how we wanted it to look. It wasn’t just going to be a regular driveway,” says Dirk Debbink of the project. “It was going to be a special driveway.” 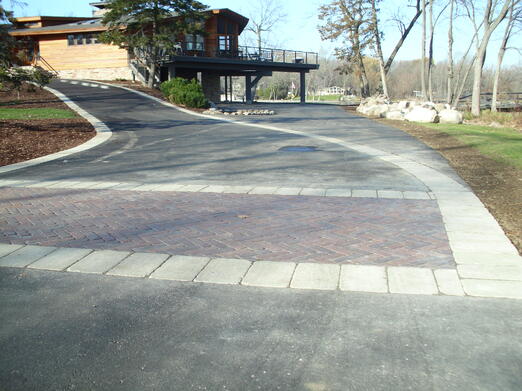 The Debbink’s were looking for a job that not only looked good but would also last. This led them to contact Wolf Paving, where they worked with Jim May, who put together a proposal for the project. The project was more than just asphalt paving. There were also unilock pavers that the landscape artists came up. Jim was asked to put together a complete proposal, which included both the landscaping and paving projects. So, he teamed up with the landscaper and coordinated the projects, having a single source responsibility. “That was really important to me.  They worked really well together,” Dirk said of the coordination.

And so, the project began. “It was fun watching Wolf Paving execute the project. There was a lot of coordination that went into it.”

The old driveway was removed and the base was graded and leveled, preparing it for the arrival of the landscaping, and then in came the paving crew from Wolf Paving. “I was impressed with what it takes to pave a project like this. I think it was a dozen or more trucks, which also had to do with the load limit on the bridge.”

The Debbink’s have known of Wolf Paving for many years. “Wolf Paving is the company to go to. They do a great job. Their plants are out here. They have a great reputation and have been around for many years. I'd absolutely refer them, and I do refer them. We're very happy with the way [the project] came out.”

“The coordination between the sales teams, Jim May, and the sub groups, Geno, and the pavers and Conrad, it was fun to watch them all together. And the glue that held them all together was Jim May. Great job.”

“A year ago, we hired Wolf Paving to put the top coat on our driveway. As our warranty period was coming to a close, we had a couple of issues to attend to. Within 16 minutes, I received a response email from Jim May, who happened to be out of town for the week. Within a couple of hours, I received a call from someone saying that one of your crews was finishing up a job , and would be able to be at our home by about 4:00PM that same day.

Chris, the Project Manager or Supervisor, showed up at our house with his crew. My wife, was at home when the crew arrived. She was very impressed by Chris’ friendliness, professionalism and thoroughness, as well as that of the rest of your crew. She could not say enough good things about the experience. I would like to complement and thank Jim May, Chris, and the crew for handling our request within hours of my email to Jim, and congratulate you for having a top-notch organization.”

Your men were very professional and informative from start to finish.

Geno and Tony were fantastic. Their attention and devotion to detail gave me the confidence of knowing that the job was going to be well done. Geno even called me that evening, after a heavy rain, just to make sure the water was flowing as he intended after spending the day shaping my driveway.

From the salesman and office secretary to your finish asphalt crew, all were outstanding and very professional. Be proud of their work. The whole job was done well, and it has been the talk of the neighborhood.

Communication, flexibility and a courteous crew. Everyone was great to work with, starting with my salesman.

Thanks for the great job and the phone calls keeping me informed. It shows your commitment to outstanding customer service!

“All the members of the resealing crew were especially helpful for my job. They paid great attention to detail, and everything was neat and clean when the job was finished!”

“I was initially just looking for a quote for my driveway repair while I was trying to sell my house. I got turned away by over 12 other companies. Wolf Paving was the only one willing to help out. Another company followed up with me seven weeks after my initial call but I was already impressed with the customer service from Wolf Paving. Thank you so much!”

“I was impressed with the quality of workmanship, communication, professionalism, and efficiency. Wolf Paving made us feel like VIPs.”