Residential and commercial paving projects aren’t the only types of projects Wolf Paving tackles. They are currently working on Coffee Road in New Berlin, WI. 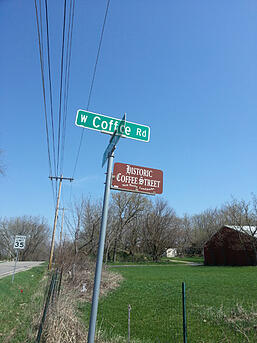 Wolf Paving is proudly partnering with a variety of contractors for this project:

They are also working with Central Services for restoration work.

What is the Coffee Road project?

“It’s a pretty challenging job. New Berlin had some challenging soils – their soils are horrible. There’s no doubt that this coffee road – one of the oldest paved roads in New Berlin – is built on some really horrible ground. It’s in some lowland and has some drainage issues.” 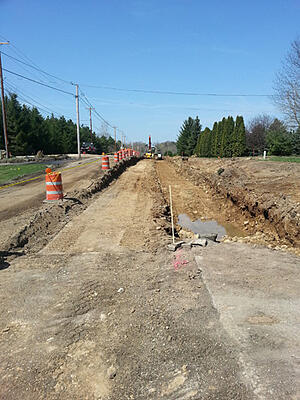 “If money were no object, there’s no argument that it needs a total reconstruct where we would take everything that’s there out, and start from square one - widening it, reshaping it completely – but nobody has unlimited budgets.”

“New Berlin is using a geo-synthetic fabric, a grid, on this paving project to leverage some of the existing road, which has environmental and cost benefits.”

“This road is currently 22 feet wide – and needs to be widened out to 34 feet, while leaving the existing 22 feet in place. If you’re picturing a typical road, we’re going to excavate the edges, put in new base material and asphalt pavement, beyond that a new shoulder and new ditches. It’s a half a reconstruct and half we’re going to use the existing road – making it pretty challenging because the old road is in pretty bad shape.”

“In April, the preliminary work began with traffic control, erosion control permits. We started doing milling work. There are a couple reconstruct sections of the road where we’re taking a hill out approximately 5-feet and flattening the road out a little bit – so some pretty major earth work. So we had to take the pavement off in that section. We’ve started on putting in new sewer pipe, hill excavation, and doing the ditching work.”

There’s a full schedule through October.

“This project is cut into four phases because a large portion has to stay open to local traffic. You can’t just shut down a road. New Berlin determined the phasing plan with what research they’ve done on traffic patterns.”

“There are 4 complete sections that are independent of each other. There are 2 phases that can go on at the same time. And when they are done, we are able to move on to the next steps.”

“Some of the road is 100% completely open, but it’s within a section of road that is completely closed.” 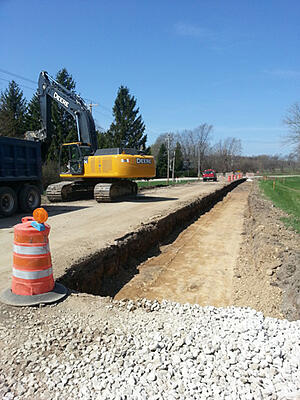 “In some areas, the road is also being straightened, meaning there’s going to be 10-12 feet more asphalt on one side and no new asphalt on the other- or any combination of 10-12 feet you can imagine - 5 on one, 7 on the other, etc.  New ditches are being added, along with some new storm sewers.”

“We have some high-density requirements on this job.  We’re going to use a MTV (Material Transfer Vehicle) (commonly called a shuttle buggy) – that allows us to dump our asphalt out of the dump truck into this transfer vehicle, which can hold 25 tons – the whole truck. The asphalt goes up a conveyor into a larger conveyor and into a hopper. The paver has an insert in it allowing us to put the asphalt into the paver without having to worry about the trucking so much. We can concentrate more on the paving and less on the trucks.”

“We’re also going to be bringing out pneumatic tired rollers to help meet the super high-density requirements. It’s one of the highest we have ever seen. It’s going to be a challenge – new territory for us. It’s far beyond industry standard spec.”

“We’re actually going over the old asphalt (once ground to a new profile) with a first layer leveling the course of asphalt.  Next we’re going to put down a product called glass grid. It’s like a fiberglass reinforcement layer between the lifts of asphalt to delay or reduce the amount of reflective cracking that comes through.”

“It almost looks like a miniature plastic chain-like fence. It gets rolled out. It has a tacky surface on it. It’s almost like putting reinforcing mesh into concrete – to make it stronger. By putting this glass grid in there, they are going to be able to reinforce that existing road, making it a long-lasting project just by that one step.”

“New Berlin has been working on designing this project for 4-5 years. Their design is the right solution for this job.”

Stay tuned for more details on the project.