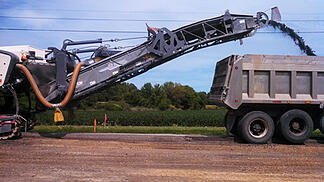 Wolf Paving completed the 2.75-mile Coffee Road municipal paving project in New Berlin, Wisconsin. There were four phases of the municipal project, pre-determined by the City of New Berlin. The project included widening and straightening the road, strengthening the base through the use of geo-textile fabric and Glas-Grid reinforcing pavement mesh, and applying the new asphalt pavement along the entire road. The project began in April 2013 and was completed in October 2013.

Wolf Paving needed to do some milling work at Coffee Road in New Berlin, to allow for the reconstructed boulevard section, as well as two other pre-determined reconstruct areas where significant excavation had to take place and curb and gutter areas.

This particular milling machine can fill a dump truck in about forty seconds. Computer-controlled sensors control all of the elevations. It can change the shape of the pavement or strip the pavement off and leave the gravel below.

Historically, roads used to be removed by earthmoving machines. They would rip the roads out with an excavator and load it into the trucks. It was a very expensive and not an earth-friendly process. Now, most of the time, they do a lot more pulverizing, where the existing road is pulverized reused as base. If elevations do not allow for pulverizing and re-using the material as road base, they remove the pavement by milling. The production on the milling machines, to be able to remove the pavement, is faster than an excavator, and it also gives you a head start on processing the asphalt.

All the material that is milled goes back to the manufacturing plant for recycling. It is broken down further until it is the necessary size to make new asphalt, and is used again in another paving project.

Contact Wolf Paving to learn more about asphalt paving or to have your parking lot, road or driveway paved.
With 75 years of asphalt paving experience, from highways to driveways, we are your local source for all of your asphalt paving needs.

Wolf Paving offers professional paving services from Milwaukee to Madison, and everywhere in between, including all areas around: Sun Prairie, Oconomowoc and Waukesha.